No River to Cross 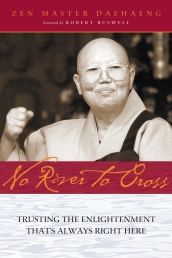 Seon Master Daehaeng’s ability to reach out to a wide audience
of both ordained and lay Buddhists is well documented in
this anthology No River to Cross. Her method of teaching is
disarmingly simple, yet remarkably profound. She is widely
known for her insight into people’s character and her ability to
draw on that insight to craft teachings that correspond precisely
to the needs of her audience. Seon Master Daehaeng emerges
in this collection as one of the most creative and accessible of
contemporary Korean Buddhist teachers, who can use even the
most mundane of daily events as grist for the mill of Buddhist
teaching and practice. [From the preface, by Professor Robert Buswell,
Director of the Center for Buddhist Studies, UCLA]